One of the biggest things that differentiates Keller Williams from other brokerages is the Profit Share program. Just like you, each Keller Williams office wants to make a profit, but unlike other brokerages or businesses you have worked for in the past, each KW office that is profitable splits that profit with agents. Let’s talk about how this is done, who can participate and how profit share is calculated.

Who is Eligible to Participate?

Any agent can participate in profit share! Once you have been an agent for 3 years and 1 day, your profit share is also yours even if you leave Keller Williams or retire. Think of it as a lifelong income stream. You are also asked to choose a beneficiary to inherit your profit share.

When you join Keller Williams you elect a sponsor which is the person that did the most to make you want to join KW. Once you are an agent you can of course discuss KW with other agents or people that want to become an agent and they can elect you as their sponsor. As a sponsor of an agent, you are eligible for the profit share program based on that agents results. This means your sponsor is invested in your career and helping you succeed.

Each KW office that is profitable splits that profit. About 52% goes to the owners of that branch, while about 48% goes into the profit share pool each month. All of this money comes from the 30% agents pay from each of their commissions until they cap. (After you have reached your cap each year you get 100% of your commission, read more on how agents earn and split commissions here.) 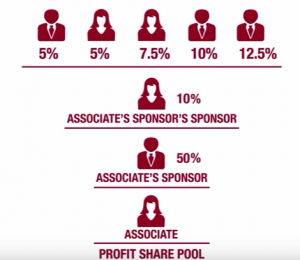 How Much Does it Really Add Up To?

Not every KW agent participates in profit sharing, in fact 65% of Keller Williams agents don’t participate! And yet, here are the numbers that agents have taken home since the system was created:

Remember that is in addition to what they earned selling homes, and many now earn more in profit share than they do acting as an agent! By helping Keller Williams grow, you are also helping your own income, and that of the agent you sponsor. Without all of us being successful, none of us would be, and that is part of the great culture of being a KW agent. Every agent also has access to their market centers books so you can see how the market center is doing at any point in time. This transparency really sets Keller Williams apart from other brokerages. You can read the white paper on the profit share system here and watch the video below.